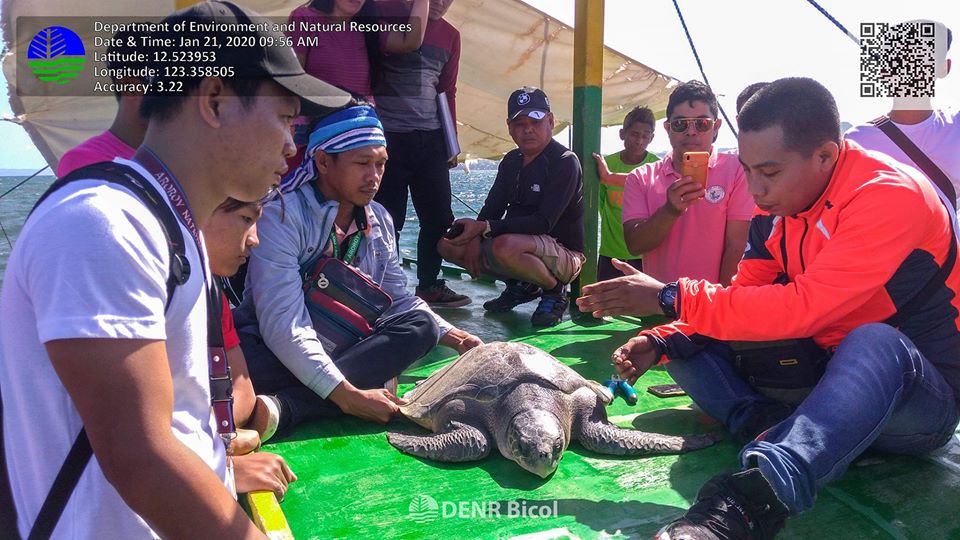 The Community Environment and Natural Resources Office (CENRO) Mobo in Masbate province headed by CENR Officer Jean V. Imperial together with the Coastal Resources Manangement Office (CRMO) of the Local Government Unit (LGU) of Aroroy, Masbate rescued an Olive Ridley Sea Turtle (Lepidochelys olivacea). The sea turtle measures 57 centimeters in length and 51 centimeters in width was trapped in the fishing net of Ariel Oliva, a resident of Barangay Tigbao, Aroroy, Masbate who turned over the sea turtle to the CRMO of LGU Aroroy on January 18, 2020.

LGU Aroroy Municipal Planning and Development Officer (MPDO) Engr. Arthur Merico reported the incident to CENRO Mobo who immediately responded for the proper handling of the said sea turtle, including its proper tagging.

Subsequently after, the Olive Ridley turtle was released within the marine protected area of Barangay Matalang-talang, Aroroy, Masbate.

Likewise, CENRO Mobo took the opportunity to conduct an Information, Education and Communication (IEC) campaign to some Grade 12 immersion students of Aroroy National High School.  The students were informed of the importance of  marine turtles, the negative effects of single use plastics, and the destruction of the habitat of marine animals due to coastal development and soil erosion.

The DENR Administrative Order No. 2019-09 classified the Olive Ridley Sea Turtles as Endangered Species, as such, poaching or illegal possession of these animals are punishable by law under Republic Act 9147 otherwise known as the Wildlife Resource Conservation and Protection Act.*ARC