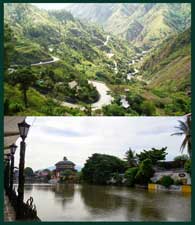 The Department of Environment and Natural Resources (DENR) has designated two river systems with important cultural heritage value as water quality management areas (WQMAs), a move that is expected to boost the tourism industry in the cities of Baguio and Naga.

By virtue of two separate administrative orders signed by Environment Secretary Ramon J. P. Paje on April 18, the Bued River System in Northern Luzon and the Naga River in Camarines Sur have been added to the list of WQMAs now numbering 23.

Paje said that securing the integrity of the two river systems not only ensures the sustainable supply of water for areas the two rivers traverse, but will also “boost the local tourism in these places known for their rich cultural and historical heritage.”

“Ensuring the water quality of Naga River will help enhance the city as a tourist destination, since it is home of the Peñafrancia fluvial procession,” the environment chief said.

He also noted that the preservation of Bued River will safeguard the image of Kennon Road, one of the vital roads that connect Baguio City and the towns of Tuba and Itogon in Benguet province, which are major tourist destinations in the north.

According to Paje, the designation of Naga River as WQMA will pave the way for the proposed Naga River Watershed, which covers some 7,686 hectares of drainage area spanning 25 barangays in Naga City and two others in Pili town.

Under the Clean Water Act, the DENR, in coordination with the National Water Resources Board, is mandated to designate certain areas as WQMAs using appropriate physiographic units such as watershed, river basins, or water resources regions to effectively enforce its provisions and improve the water quality of water bodies.

The law seeks to provide a decentralized management system for water quality protection and improvement of river systems.

Likewise, the DENR is tasked to create a governing board for each WQMA, which is chaired by a regional director of the DENR’s Environmental Management Bureau (EMB). Its members include the mayor and governor of the concerned local government unit and representatives of relevant national government agencies, duly registered non-government organizations, and business and water utility sectors.

The governing board serves as a planning, monitoring and coordinating body. It also reviews the WQMA action plan prepared by the EMB.

The DENR and the stakeholders address the water quality problems, sources of pollution, and the beneficial use of the receiving water body. They also determine what control measures to institute to effectively achieve water quality objectives or improvements. ###

The Department of Environment and Natural Resources (DENR) has partnered with the Foundation for the Philippine Environment (FPE) and three other organizations for the second Sarihay Media Awards aimed to recognize journalists for excellence in covering environment stories.

The partnership was sealed through a memorandum of understanding (MOU) signed recently by the DENR, FPE, Philippine Tropical Forest Conservation Foundation, Tanggol Kalikasan and the Miriam College Environmental Institute.

Representatives from these organizations will comprise the Technical Review committee tasked to oversee the event and acknowledge outstanding environmental media practitioners who “promote the preservation of Mother Earth and the protection of mankind through responsible and fearless news reporting on print, TV, radio and internet.”

Environment and Natural Resources Secretary Ramon J. P. Paje said the DENR and fellow organizers of the Sarihay Media Awards want to give due recognition to media practitioners, who through their exemplary work, place environment and sustainable development issues at the forefront of news stories.

“These men and women are game-changers and the Sarihay Media Awards confirm their invaluable contribution as stewards of God’s creation,” Paje said, acknowledging media’s role in the pursuit of DENR’s mandates.

“Media have boosted my department’s thrust and advocacies, part of which is to shift the citizenry’s mindset to being co-responsible for the protection of our environment,” he said.

Lawyer Marina Rabe, executive director of Tanggol Kalikasan, said the awards hopes to encourage more writers, reporters and bloggers “to continue bringing the often overlooked environmental protection and biodiversity conservation issues to the attention of the government, decision-makers and the public to raise awareness and understanding on these concerns.”

FPE executive director Godofredo Villapando Jr. urged all Filipino media practitioners and bloggers to submit their entries on environmental issues published, aired or posted from Jan. 1 to Dec. 31, 2015 to qualify for the competition. A total of 15 awards will be handed out during the awarding ceremony to be held in June.

“We encourage journalists to send in their stories and documentaries. This year, we are expecting more entries of truly inspiring and compelling materials,” Villapando said.

He added: “We envision the Sarihay to be the highest showcase for environmental journalists and broadcasters.”

Winners will each receive a plaque, cash prize and an exposure trip to an FPE-supported project area.

FPE is a non-profit organization working with the government, private sector, and civil society towards effective biodiversity conservation and sustainable development. Through its grants and programs across the country, it envisions communities caring responsibly and living fully in harmony with their environment.

The Department of Environment and Natural Resources (DENR) has expressed its gratitude to the Supreme Court for issuing a circular that is seen to speed up the litigation of environment cases.

“We want to thank the Supreme Court for issuing Circular 87-2016. This will definitely hasten the prosecution of hundreds of cases filed against violators of environmental laws, particularly illegal loggers,” Environment Secretary Ramon J. P. Paje said.

The circular, issued on April 4 through the Office of the Court Administrator, directed all judges to strictly observe laws prohibiting the issuance of injunctions against violators of environmental laws.

It cited Section 10 of the Rules of Procedure for Environmental Cases, which provides that only the SC can issue a temporary restraining order or writ of preliminary injunction against unlawful actions of government agencies that enforce environmental laws.

Since the imposition of the total log ban in 2011, the DENR has already filed a total of 1,833 cases against suspected violators of forestry laws and regulations. So far, the agency was able to secure the conviction of 214 respondents.

Meanwhile, lawyer Mike Matias of the DENR’s Environmental Management Bureau (EMB) said the circular is consistent with the 1991 SC decision on the case of Pollution Adjudication Board vs. Court of Appeals and Solar Textile Finishing Corp.

In that ruling, the high tribunal said: “Stopping the continuous discharge of pollutive and untreated effluents into the rivers and other inland waters of the Philippines cannot be made to wait until protracted litigation over the ultimate correctness or propriety of such orders has run its full course, including multiple and sequential appeal… which may take several years.”

Through the EMB, the DENR enforces environmental laws including the Clean Air Act and Clean Water Act. ###

Environment and Natural Resources Secretary Ramon J.P. Paje has congratulated the province of Albay on being named a biosphere reserve by the United Nations Educational, Scientific and Cultural Organization (UNESCO).

Paje said the designation gives due recognition to the province’s commitment to climate change mitigation and adaptation, as well as biodiversity conservation and sustainable development.

“Albay’s recognition as a UNESCO biosphere reserve is a tribute to the outstanding efforts of its people as well as its local leaders to live harmoniously with nature, to respect the environment, and to take responsibility for its rich natural resources,” Paje said.

He added: “If every community completely owns up to the care of its ecosystem, then a huge part of our country’s resources is already secured for the future generations of Filipinos.”

Albay’s inclusion in the list of biosphere reserves was announced on March 19 during a two-day meeting in Lima, Peru, following the recommendation of the International Coordinating Council (ICC) of the UNESCO’s Man and Biosphere (MAB) program.

Albay Governor Joey Salceda personally received the award, saying “this award means very much to the people and government of Albay.”

He assured the International Coordinating Council of the UNESCO Man and the Biosphere Program that Albay will always be a “champion of sustainable development.”

The MAB, set up in the early 1970s, aims to improve the “interaction between people and their natural environment on a global scale.

Biosphere reserves are internationally recognized as models of sustainable development, which provide “living observatories” for the implementation of the 2030 Sustainable Development Agenda and the Paris Agreement on Climate Change.

Albay is the third biosphere reserve in the Philippines. The first was Puerto Galera, which was declared in 1977, followed by Palawan in 1990.

There are a total of 669 biosphere reserves found in 120 countries around the world as of 2015.

Salcedo said he had increased Albay’s terrestrial and marine buffer zones from 35,000 hectares to over 131,000 hectares to enhance the conservation of its biodiversity and natural resources, and protective measures for the spawning grounds of sea turtles have been strengthened and put in place.

Albay is blessed with various terrestrial and aquatic ecosystems, vast biodiversity, including endangered sea turtles and whale sharks, and is home to the world-renowned Mayon Volcano.###

The management of the country’s over 200 protected areas (PAs) – ranging from large natural parks, landscapes and seascapes, to wildlife and marine life sanctuaries – has enjoyed significant gains with strong support from the Aquino administration, according to Environment Secretary Ramon J.P. Paje.

“The support provided by the present administration for PA management has been exponential, not only in terms of budget allocation but in legislation and strategies to enhance conservation and development,” Paje said.

According to the environment chief, such support could not be discounted given the immense role of PAs in providing services that address pressing challenges such as food and water security, health and well-being, disaster risk reduction and climate change mitigation.

Paje, however, said several challenges remain in the management of conservation areas. Among these are the inclusion of PA management in the planning and budgeting of local government units (LGUs); the scaled-up development of management capacities including financing; and decision-making that are based on science.

He cited how the budget allocation increased from P100 to P600 million in 2014 for the management of 240 PAs spanning 5.4 million hectares nationwide.

Allocations for coastal and marine areas and resources have been increased to improve their resilience, as well as that of coastal communities and marine-dependent livelihoods, to climate change impacts.

The government has also established the Integrated PA Fund (IPAF) Retention Income Account, which retains 75 per cent of revenues generated by PA for use by the PA Management Boards in their rehabilitation and protection efforts. The remainder of the IPAF is remitted to the National Treasury.

Paje likewise cited the DENR’s strong representation in Congress to push for the passage of the Enhanced National Integrated Protected Areas System or ENIPAS Act. The law addresses system-wide issues and adopts the concept of ecosystem-based adaptation to comply with the Philippines’ commitment to the Paris Agreement on Climate Change.

A record 175 countries had ratified the Agreement in New York and committed to primarily reduce greenhouse gas emissions to keep the global temperature at less than 2 degrees Celsius above pre-industrial levels.

The DENR, through its attached agency, the National Mapping and Resource Information Authority, has already completed the delineation of all PAs. Complementing this is the prioritization of 39 PAs for resource assessment, habitat protection, sustainable financing, and support to the operations of the Protected Area Management Boards.

The 20-point Aichi Biodiversity Targets provides an overarching framework for all member-countries of the United Nations and their partners engaged in biodiversity management and policy development. #