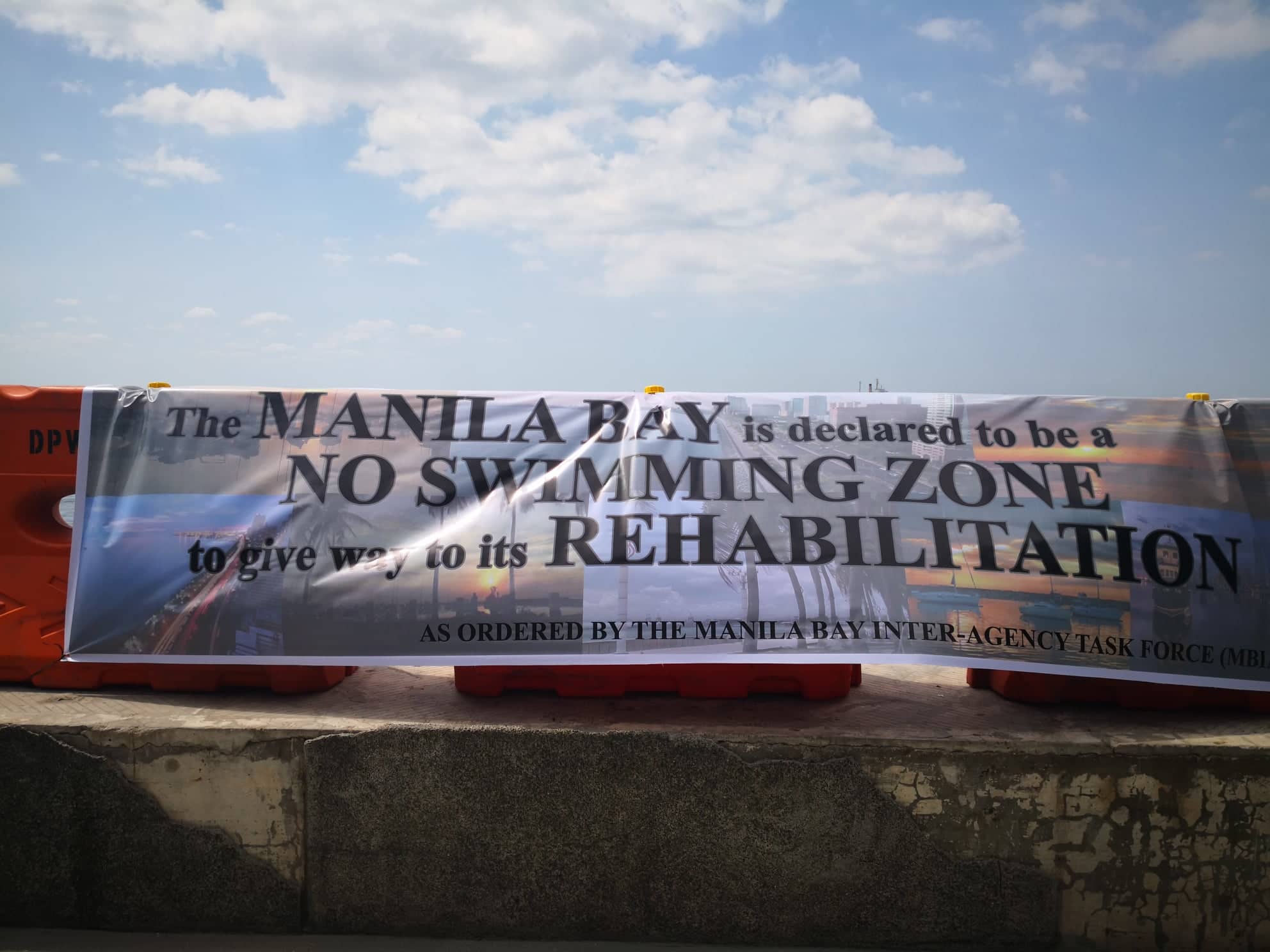 The Department of Environment and Natural Resources (DENR) warned that Manila Bay remains unsafe for bathing due to high levels of fecal coliform bacteria in its waters.

“Bathing in Manila Bay can expose people to high levels of fecal coliform bacteria, which could increase their chances of developing illnesses. Government has not yet given the all-clear signal for swimming,” DENR Secretary Roy A. Cimatu said.

Cimatu said that as of January 28, or a day after the rehabilitation was launched, water monitoring stations set up along the bay area have registered fecal coliform levels measuring as much as 35 million most probable number (mpn) per 100 milliliters, taken from the Rajah Soliman outfall or Station 5.

Another sampling station set up at the Padre Faura drainage outfall (Station 2) registered a fecal coliform count of 7.9 million mpn/100ml.

The standard coliform level for coastal waters which is safe for swimming and other similar recreational activities is at only 100 mpn/100ml.

The DENR chief issued the warning after photos of people, including children, bathing in the waters along Roxas Boulevard in Manila circulated online days after a massive cleanup activity during the launch of the intensified rehabilitation effort dubbed as “Battle for Manila Bay.”

After the clean up drive participated in by over 5,000 volunteers, photos of a visibly “cleaner” Manila Bay went viral.

Cimatu said the clean up activity, while laudable, had only addressed surface trash.

“We have not yet gotten rid of pollutants such as those from untreated wastewater being discharged into the bay, so we strongly advise the public, especially children, to refrain from swimming in the bay for now,” he reiterated.

As for the water sampling in the other stations along Baywalk, the fecal coliform count in mpn/100ml is as follows:

The Department of Health had earlier also warned that it is not safe to swim in Manila Bay, citing health issues.

Diseases and illnesses that can be contracted in water with high fecal coliform counts include typhoid fever, hepatitis, gastroenteritis, dysentery and ear infections.

More than conducting cleanup activities, Cimatu said the real challenge was in addressing sources of water pollution, such as sewage or untreated wastewater being discharged either directly into the bay or via its tributaries.

The DENR had previously reported that the coliform level in Manila Bay had reached as much as 330 million mpn/100ml, which is 3.3 million per cent over the standard.

The EMB had also monitored extremely high coliform counts in 11 outfalls draining into the bay in 2018.

For instance, the Estero San Antonio de Abad outfall, which drains into a portion of the bay within the Manila Yacht Club area, registered 1.36 billion mpn/100ml.

Fecal coliform are bacteria associated with fecal material from humans and other animals. They enter bodies of water from sources such as direct defecation or sewage overflow.

The presence of fecal coliform in water bodies indicates contamination from sewage.

In 2008, the Supreme Court issued a writ of continuing mandamus ordering the DENR and 12 other agencies to restore the waters of Manila Bay to class SB level.

Class SB level classifies coastal and marine waters as safe for regular use by the public for activities such as bathing, swimming and skin diving, and as spawning areas for bangus and other similar species of fish. ###