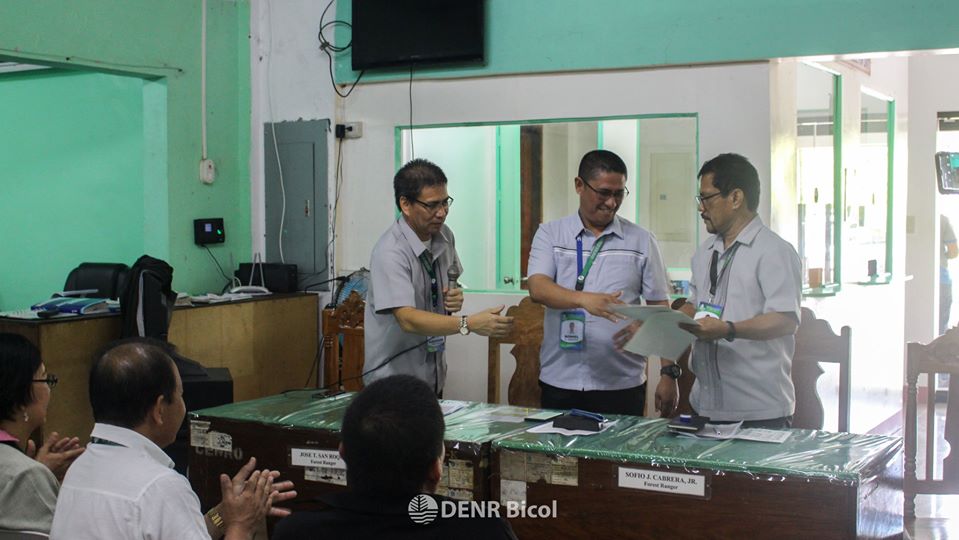 The post was turned over from PENRO Catanduanes OIC, PENRO and TSD Chief Forester Ferdinand Baltazar, who served in-concurrent capacity. OIC, Assistant Regional Director for Technical Services (ARD-TS) Atty. Ronnel C. Sopsop led the turnover ceremony at the PENRO Catanduanes Office at San Andres Village, Virac, Catandauanes, which was also witnessed by the personnel from the provincial and regional offices.

In his message during the ceremonial turn-over, OIC, ARD TS Atty. Ronnel C. Sopsop representing OIC, Regional Executive Director Atty. Gil A. Aromin said, “Let us not fear change because to improve is to change.” OIC ARD Atty Sopsop stressed that the leaders of an organization come and go, but what is important are the people where these leaders go. “There is no good leader, without a good team,” he added.

Meanwhile, OIC, PENRO Arena delivered his acceptance speech and recognized that his designation is more than just a responsibility but also a challenge as the new father of PENRO Catanduanes. “This will not be a walk in the park, this journey will not be easy,” he said. However, he said that he is hopeful that the men and women of PENRO Catanduanes will be with him in this journey.

PENRO Arena started his professional career in 1986 as a contractual Survey Aide and Cartographer in a private Surveying office. He then became a Draftsman/Instrument Man in another Surveying office. In 1989, he served as a Geodetic Engineer at the Department of Environment and Natural Resources Office – Mines Sector. In 1995, he assumed as Officer-in-Charge of the Community Environment and Natural Resources Office (CENRO) Mobo. After which, he became the Lands Management Officer (LMO) III of the same Office. In 2017, he again took office as the OIC of CENRO Mobo, until he became the Head Executive Assistant of the Office of ARD-TS. Following the said stint, prior to his assignment as OIC PENRO of Catanduanes, Engr. Arena served as the OIC TSD PENRO Albay.

The change of leadership in PENRO Catanduanes is in accordance with the Regional Special Order No. 2020-007 signed by Regional Executive Director Atty. Gil A. Aromin dated January 10, 2020.